The entry into the 20th century was a time of frightening change for intellectual Britain. Victoria, who had held the realm stable for more than 60 years, was gone. Freud was exposing the workings of individuals’ thoughts and desires. Einstein published his theory of relativity, apparently undermining the Newtonian view of the universe. Painters like Picasso were pulling the human form apart into geometric shapes. War ravaged Europe; revolution would topple monarchies in Russia and Spain. The greatest monument to human industry and progress ever conceived, H.M.S. Titanic, hit an iceberg, and you know the rest.

Motorcars, gas and electric light, photography, phonographs, the telephone, the telegraph—technology changed the way people lived and increasingly seemed to depersonalize human existence. Women were chaining themselves to the railings outside Parliament to demand the right to vote, and were taken to prison and brutally force-fed when they tried hunger strikes. The British empire was vast, and grand, and unmanageable—and eventually, its components on the Indian subcontinent and southeast Asia would strike out for their own independence.

A strong crop of British authors emerged during the 20th century. From "The Waste Land" to 1984, 20th century British writers helped shape the modern and postmodern movements in art and literature. While they have been strong in number, the majority of great works came during the first half of the century. Unparalleled economic and geopolitical catastrophes helped mold a generation raised with great hardship and little hope. World Wars I and II and the severe economic depression in between encouraged the exploration of themes like destitution, despair, cynicism and loss. Instead of "faith and doubt," it was a period of "doubt in faith"--for it seemed to most intellectuals that in a world where people gassed each other and perpetrated the most awful kinds of atrocities, faith was irrelevant.

In this culture, where it seemed that individualism and every man for himself dominated, it is easy to see why this was perceived as an age of isolation where connection with others, with society, was viewed as a near-impossibility. The poets, dramatists, and novelists of the period adopted Pound’s slogan "Make it new!" – not "Make new art" but a cry to rebel against Victorian convention, to despise the middle class reading public, to make art more deliberately obscure, and to discriminate between highbrow (hard, difficult, obscure) writing and lowbrow (easily accessible, appealing to popular taste) writing. Periodicals like Blast! (which only lasted two issues) showed that modern artists would revolutionize even the way writing looked to shake up the certainties of the past. The Blast! Manifesto (pp. 1093-1096) includes the defiant statements "The artist of the modern movement is a savage" and "There is no vulgarity in revolt" and celebrates machinery as the new imagery of nature.

The Norton Anthology of British Literature website notes that "In England, this outbreak of modernist experiment influenced a loosely interrelated network of groups and individuals, many of them based in London. In anglophone literature, “modernism” more nearly describes an era than a unitary movement. But what connects the modernist writers—aside from a rich web of personal and professional connections—is a shared desire to break with established forms and subjects in art and literature. Influenced by European art movements, many modernist writers rejected realistic representation and traditional formal expectations. In the novel, they explored the Freudian depths of their characters’ psyches through stream of consciousness and interior monologue. In poetry, they mixed slang with elevated language, experimented with free verse, and often studded their works with difficult allusions and disconnected images. Ironically, the success of modernism’s initially radical techniques eventually transformed them into the established norms that would be resisted by later generations...[In the early period of modernism,] Poetic doctrine included the use of plain speech, the preference for free verse over closed forms, and above all the creation of the vivid, hard-edged image...As modernism developed, the flashy, aggressive polemics of Lewis and Pound were replaced by the more reasoned, essayistic criticism of Pound’s friend and collaborator T. S. Eliot. Eliot’s Waste Land and James Joyce’s Ulysses were technically innovative and initially controversial (Ulysses was banned in the United States and Great Britain), but their eventual acceptance as literary landmarks helped to bring modernism into the canon of English literature. In the decades to come, the massive influence of Eliot as a critic would transform the image of modernism into what Eliot himself called classicism, a position deeply rooted in a sense of the literary past and emphasizing the impersonality of the work of art." 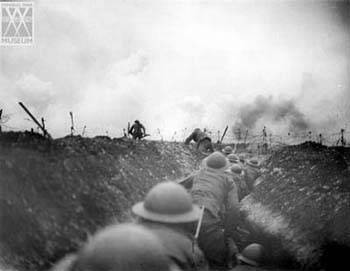 And then there was The War. We now call it World War I; they didn’t know there would be another one, and they called it "The Great War" (a richly ironic title—it’s great only in size, of course). With the use of railroads to deliver armaments, the new airplanes and zeppelins to drop bombs, the use of poison gas to kill people by destroying their lungs without leaving a visible mark on the dead soldier’s body; trench warfare that raged on in horrible weather and might gain only a few yards of ground in weeks of fighting—in battles like the Somme (July-0ctober 1916) killed as many as a million British, French, and German soldiers in a battle over 20 miles of territory—the viewpoint of Britons turned to one that was deeply cynical and deeply shaken, mourning the loss of Imperial certainty and their former glory. The "War Poets" (Rupert Brooke, Siegfried Sassoon, Wilfred Owen, Isaac Rosenberg, David Jones) signal the changing attitudes of the British intellectual to war. Brooke’s "The Soldier" (1098-99) was hailed as a second version of Grey’s Elegy, while Sassoon’s bitter reflections were despised as unpatriotic (he was "rediscovered" after his death in 1967 and became a great favorite during the Vietnam era). Owen’s beautifully allusive poems were much admired by Eliot and Dylan Thomas, and "Dulce et Decorum est" ( p. 1102) is as powerful a picture of a soldier killed by gas as exists (it was a source for Tolkien’s picture of the Dead Marshes in Mordor). Minimalist poets like Rosenberg and experimenters like Jones caught the fragmented, incoherent order of the new war in ways that shook the literary world.

The four iconic authors of the British Modern period are Joyce, Woolf, Yeats, and Eliot. Three of the four weren't born in the country of England, but all four together represent the artistic, technical, and creative brilliance of this period, which fundamentally reshaped the tastes and trends of British literature as significantly as any period in British literary history. We tend to scant these figures a little in the survey because we offer a number of 300- and 500-level courses in modern British writing, and these are some of the most popular courses in the department. As you read the brief snippets of their works here, think about what Eliot talks about in "Tradition and the Individual Talent:"

"Great difficulties and responsibilities" and the sense of the necessity of the changes a work of art makes--how its ripples disturb and derange everything that has happened before--are hallmarks of this period. As Yeats wrote in "Easter 1916," everything is "All changed, changed utterly: / A terrible beauty is born." And that terrible beauty is the modern period of British literature.